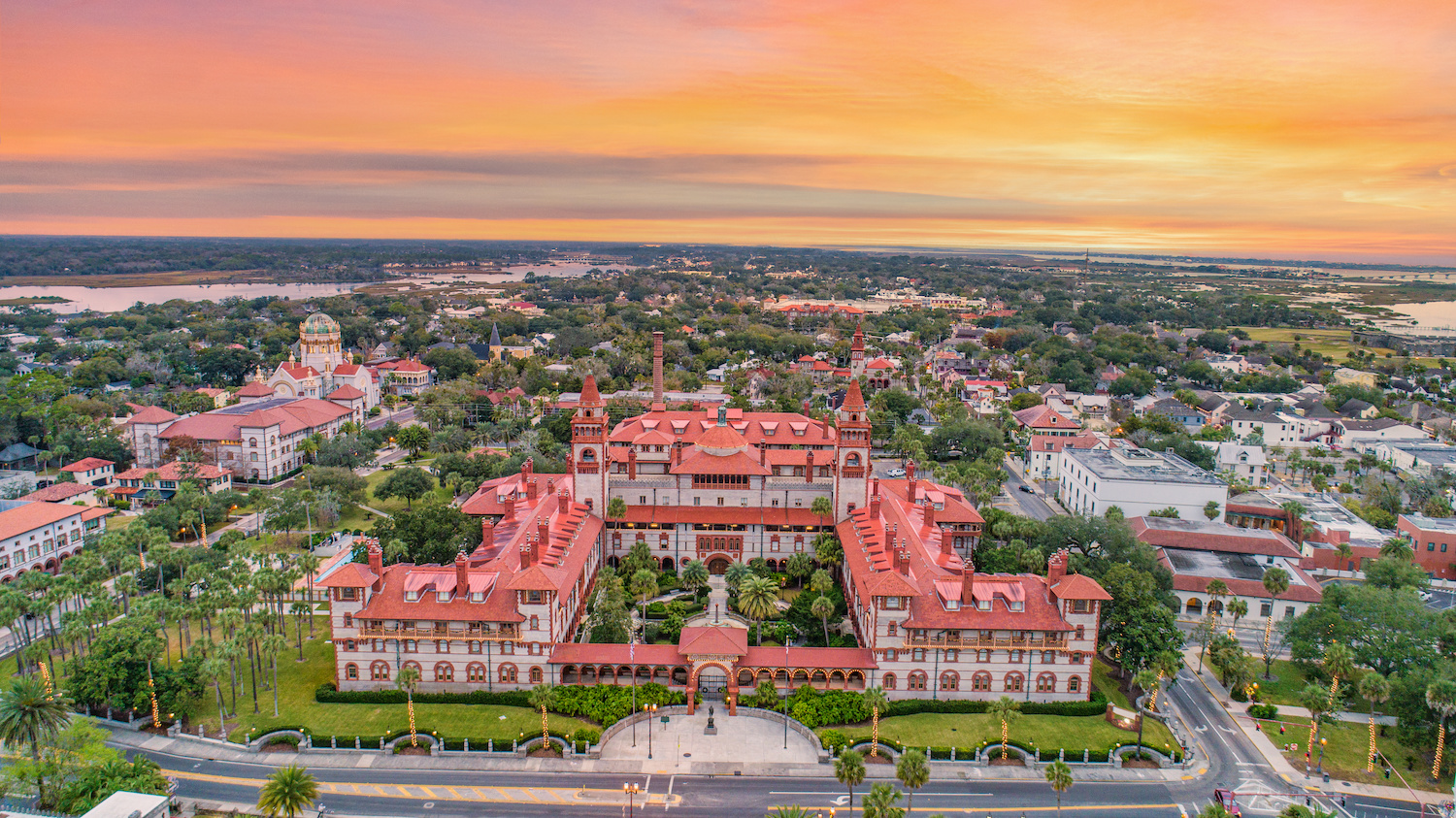 Jacksonville may be the biggest name and the city with the largest landmass in northeast Florida, but it’s hard to beat the historic allure and charm of nearby St. Augustine. This Sunshine State stunner, best known for being the oldest continuously inhabited European-established settlement in the contiguous U.S. is proud of its heritage. In fact, St. Augustine’s official nickname is “Ancient City,” a moniker you’ll see on storefronts throughout the town. But there’s more to love about St. Augustine than just its legacy—the city is brimming with a delectable food scene, sparkling waterfront vistas and outdoor activities galore.

St. Augustine is the county seat of St. Johns County and is situated about 40 miles southeast of downtown Jacksonville. Its location makes it part of Florida’s First Coast—the five counties surrounding Jacksonville—a catchphrase used to describe the location where Europeans first colonized in Florida. Nearby St. Augustine Beach rests along the Atlantic Ocean.

St. Augustine was officially founded on September 8, 1565, by Pedro Menendez de Aviles, who would go on to become Florida’s first governor. As is the case with much of the land throughout the area, what is now modern-day St. Augustine was the backdrop for many battles between the Spanish, French and English. In 1586, famed English explorer Sir Francis Drake would burn the city to the ground, though he wouldn’t be the last to destroy the settlement in a quest for power. Eventually, thanks to the 1783 Treaty of Paris, all of Florida was ceded back to Spain

The Spaniards continued defending their right to the land for years until it became a part of the United States in 1821. Railroad magnate Henry Flagler became an increasingly prominent player in the St. Augustine scene once it became a U.S. city, building a railroad and two ornate hotels for visitors. In the decades that followed, the city would continue to grow in population as full-time residents moved into the area. And beginning in the 1960s, a concerted effort was made to restore the most historical parts of the city.

Children who attend public school in St. Augustine go to schools with oversight by the St. Johns County School District. The district is consistently one of the top school districts in all of Florida. St. Augustine High School and Pedro Menendez High School are the city’s public high schools, with a litany of elementary and middle schools serving the role of feeder schools. St. Augustine is also home to the Florida School for the Deaf and Blind, which has been in existence in the city since 1885 and is the largest school of its type in the entire country. Located in the heart of St. Augustine you’ll also find Flagler College, a four-year liberal arts college.

In reviewing AreaVibes.com, it’s clear that St. Augustine stacks up well when compared to other cities in Florida and the United States in a variety of categories. Costs related to goods and services, groceries, health care, and transportation are all less than in other cities in Florida. Still, significantly higher housing costs ultimately inch St. Augustine’s total cost of living above both the state and national average.

You’ve probably figured out by now that St. Augustine is a history buff’s dream. The city’s most impressive and historically significant highlight is the Castillo de San Marcos, famous for being the oldest masonry fort in the lower 48 states. Another hot spot for history lovers is the Lightner Museum, which houses pieces specifically from the Victorian period. St. George Street is another main attraction right in the heart of it all with restaurants, bars, shops and attractions.

The St. Augustine Alligator Farm Zoological Park is a popular pick for those looking to (safely) get up close and personal with every living species of crocodilian. Big fan of the beach? St. Augustine Beach and Anastasia Island State Park are both fantastic options for soaking up sun, sand and surf. And, of course, what would a day in St. Augustine be without a trip to Ponce de Leon’s Fountain of Youth?

Thanks to the abundant amenities and benefits of living in St. Augustine, the city’s housing stock has been impacted. However, there are still options out there, from beachfront condos and bungalows to single-family homes in established and historic neighborhoods.

Ready to take the plunge and make a move? If so, you really can’t go wrong with a move to St. Augustine.